10/28/2015
Mean Time Between Failure (MTBF) is a measure of the reliability of a hardware product, component or system.  MTBF is largely based on assumptions and the definition of failure and attention to these details is important for proper interpretation.  For complex, repairable systems, failures are considered to be those conditions which place the device or system out of service and into a state for repair. Failures that can be left in an unrepaired condition, and do not place the device or system out of service, are not considered failures under this definition. In addition, units that are taken down for routine scheduled maintenance or inventory control are not considered within the definition of failure. [caption id="attachment_1483" align="alignleft" width="1024"]

Calculating Mean Time Between Failures (MTBF)[/caption]   The MTBF should not be confused with the life expectance.   An example is the best way to describe the difference.  All humans have a life expectance of 80 years or 700,800 hours.  However, the human body fails at different rates depending on its age. There are 500,000 25-year-old humans in a sample population.  Over the course of a year, data is collected on deaths for this population. Throughout the year, 625 people died.  The MTBF is (500,000/625)x24x365 = 7,008,000 hours (800 years). So, even though 25-year-old humans have high MTBF values, their life expectancy (service life) is much shorter and does not correlate.   How is MTBF calculated? The Mean Time Between Failures (MTBF) of a product is determined using the following equation[1]: [caption id="attachment_1484" align="aligncenter" width="252"]

Mean Time Between Failure (MTBF) Equation[/caption]   F = number of failures per year divided by the number of units shipped per year   How do Brooks Instrument Mass Flow Controllers (MFCs) stack up? With the largest installed base of thermal mass flow controllers and mass flow meters around the world, Brooks' flow meters provide significant advantages in long term stability, response time, accuracy, repeatability, turndown, self-diagnostics and application flexibility. Brooks Mass Flow Controllers and Mass Flow Meters offer: Brooks Instrument mass flow devices have industry leading mean time between failure (MTBF) which provides the user with maximum up time.  MTBF for several SLA Series mass flow controller models is shown below.     This MTBF information is based on actual shipments and warranty returns over a 1.5 year period.  This period includes the infant mortality phase shown in the "bathtub curve" below and as a result likely underestimates the MTBF.   [caption id="attachment_1485" align="aligncenter" width="300"] 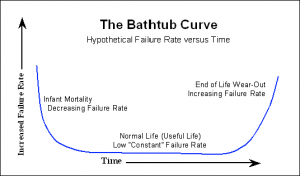 The Bathtub Curve illustrates hypothetical failure rate versus time[/caption]   If you have questions about MTBF or any Brooks Instrument products or services please contact one of our applications engineers or your local Brooks Instrument sales expert. [1] W. Torell & V. Avelar; "Mean Time Between Failure: Explanation and Standards"; APC White paper #78.